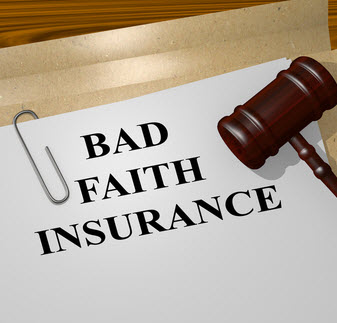 Other actions that could constitute bad faith include:

Of course, these are not the only potential actions that could trigger bad faith liability. It’s also important to note that Florida law also permits third parties (someone other than the insured) to file bad faith claims. This right is recognized under both statutory law and common law. (Common law means law derived from the courts and not from statutes).

Keep in mind that bad faith is a higher standard than negligence (failure to use reasonable care). That’s why some insurance industry groups are worried about the current Florida Supreme Court case. They worry that a decision in favor of Harvey would lower the bad faith standard and put it on par with a negligence standard, meaning that they could face greater liability under the bad faith law.

But forcing insurance companies to take greater care in handling the claims process is never a bad thing.

Has Your Insurer Acted in Bad Faith?

The Florida Supreme Court is considering a case that could expose insurance companies to greater liability under the state’s bad faith law, which protects consumers from unfair insurance practices.

The lawsuit stems from a 2006 car accident in Palm Beach County that left John Potts dead. The at-fault party, James Harvey, had a $100,000 policy with GEICO, which sent a check for that amount to Potts’ estate. But the estate returned the check and filed a wrongful death lawsuit against Harvey. The jury awarded the estate $8.47 million in damages. Harvey then filed a lawsuit against GEICO, alleging that the insurer acted in bad faith by not working with the estate’s attorney prior to the lawsuit.

The estate had requested information regarding Harvey’s personal and business assets and whether he was acting in the course of his business when the accident occurred. A trial court ruled in favor of Harvey, but an appeals court reversed. Now the state Supreme Court will decide.

The Florida Justice Association, however, argued in a brief filed last month that the Supreme Court should overturn the appeals court ruling that favored the insurer… That insurers have a good faith responsibility to protect customers from judgments that exceed their insurance policy. Hopefully, the Supreme Court will agree with Harvey and continue to broaden the definition of bad faith by the insurance company.  The more actions that can cause insurance companies to trigger bad faith, the greater duty of care they will provide the insured.

Reach Out to Us for Help

The attorneys at The Insurance Litigation Group understand that you can’t afford to wait around while the insurer engages in its delaying tactics and bad faith conduct. ILG is focused on achieving rapid results and engages in aggressive litigation for fast settlement or conclusion at trial where necessary. Contact the Florida attorneys at the Insurance Litigation Group for a free consultation if your insurer has acted in bad faith in responding to your claims, or if you are a third party with a bad faith claim. We are eager to assist you throughout each step of your case.