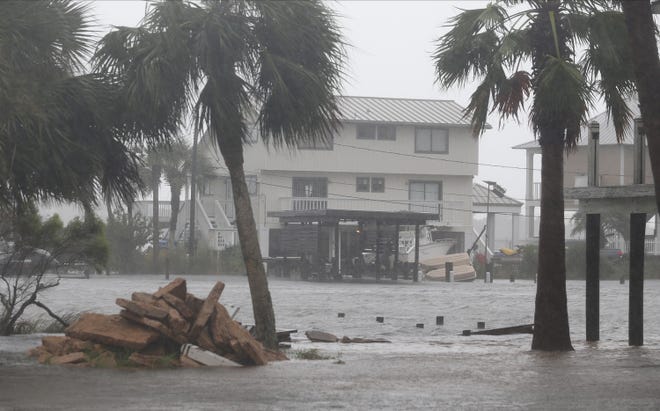 Hurricanes leave a long lasting impact on the residents who were affected by it. After the events of Hurricane Sally, thousands of North Floridians were left with the aftermath- but it seems as though the federal government is forgetting them.

The Category 2 storm had 105-mph storm winds that ended up leaving up to 30 inches of rain, affecting homes, businesses, farmland, and more. The Federal Emergency Management Agency, along with other federal partners, are meant to help with disaster aftermath, offering supplies as well as financial assistance to communities. However, this does not seem to be the case for Hurricane Sally.

President Trump issued a Major Disaster Declaration one week before the storm hit on September 23rd, but only sent federal aid for debris removal and infrastructure strictly to local governments, and strictly in Escambia County- excluding a dozen other North Florida counties and those residing in them. The storm especially affected farmers who were left with 100% losses.  Florida Commissioner of Agriculture and Consumer Services Nikki Fried has expressed major concern for those affected residences and counties. Senators and Mayors throughout Florida have expressed concerns as well, emphasizing that residences are being treated poorly and unfairly with “nowhere else to go”.

Fried sent a request to President Trump asking for an expansion for his Major Disaster Plan in order to help those residents who were left to suffer. People are left without aid; farms are left drenched with over 150,000 acres of crops, farms, and more being negatively affected. She asked Governor DeSantis multiple times to request assistance from the U.S. Department of Agriculture, as well as reaching out to Senators Rubio and Scott, and Representatives Dunn, Gaetz, and Lawson. The Governor has yet to request disaster aid from the USDA, leaving residents in an extremely difficult position. Residents waited two years for Hurricane Michael grants and more, leaving people more vulnerable- if the same thing occurs with Hurricane Sally relief, more trouble will arise.

Fried believes that while residents are continuing to stay as strong as possible, it is our leaders’ responsibility to help those who need it. She is calling for the President, Governor, and Federal Government to do their part and assist the Panhandle in the way that they need.

At ILG, our experienced and aggressive attorneys take the time to analyze and interpret your policy and understand the full measure of damages available to you. We work with construction experts, restoration professionals and others to determine the facts. We fight for you! Visit https://bit.ly/30GW3Fm or message us here.