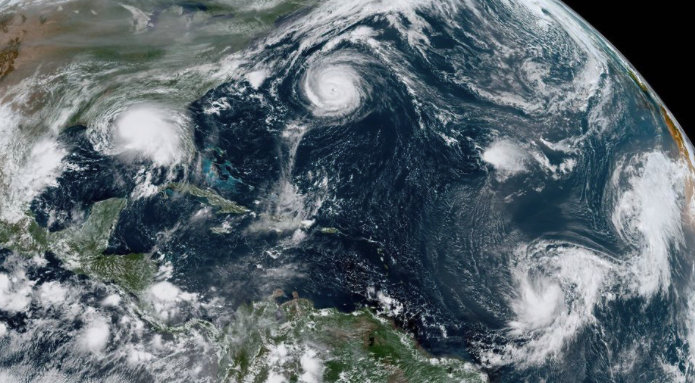 This 2020 hurricane season has been nothing short of busy- and it is believed that it will continue to be quite active. Just this week, Tropical Storms Teddy and Vicky formed in the Atlantic, with Sally then emerging into a hurricane. Hurricane Paulette and Tropical Depression Rene are also still active. With five total active named systems in the Atlantic basin, this is the most there has been since 1971.

We have seen an extremely active hurricane season so far, and as we go through the month of September, the peak of hurricane season, we can expect more activity to come.

The World Meteorological Organization has a list of storm names for the Atlantic, East North Pacific, and Central North Pacific basins. There is currently only one name left for the Atlantic this storm season- Wilfred. The list uses 21 of the 26 letters of the alphabet, excluding Q, U, X, Y, and Z. The list of names are recycled every six years, while severe, destructive storm names are retired completely. If all 21 names are used this hurricane season, meteorologists will then move to the Greek alphabet list, which contains 24 letters total. The only time this has occurred was back in 2005. The record-breaking hurricane season ended with a total of six names being used from the Greek alphabet.

The increase of named storms comes from various contributing factors. In the past, many systems were ignored or put on a much longer watch than they are now. Changes in trade winds and warmer sea surface temperatures also contributed, as well as changes with vertical wind shear. To be named, a tropical system must reach tropical storm strength- 35 knots. They must also have a low pressure area, be over water and tropics, and have a warm core.

Not only have we seen more named storms than normal, they also have broken records for forming so early in the season.

Every homeowner’s policy is different. To ensure you’re prepared for the next hurricane or major storm event, it’s critical for someone to review your policy who knows what to look for, so you can understand what you do and do not have coverage for. Contact us to get your FREE homeowners policy review from one of our experienced attorneys.